Past Chief Rick Parrett, Jr. was selected to receive the award by the BBVFC.  The following citation was read at the ceremony:

"At last year’s Valor Awards event, Josh Freeman, who meant a lot to the Bethany Beach Volunteer Company (BBVFC) as an organization and to many of its members personally, said that “valor is a label that has no boundaries.”  While he acknowledged the traditional association of valor with heroic acts, he also reminded everyone that exceptional commitment to others was in itself valorous.  In the spirit of Josh’s comment and in remembrance of his profound influence on us, we hereby nominate Rick Parrett, Jr. for the 2007 Valor Award."

"Rick joined the BBVFC almost twenty years ago while still in high school.  In the intervening two decades, he has held virtually every line position in the Company and was fire chief for six of the last ten years.  Even now, having more than earned a well-deserved rest, he continues as both vice president of the Company and as a line captain.  We can not even begin to guess how many thousands of hours he has committed to our community and how many times he has been called away from his wife, Betsey, and their son, Ricky.  By these achievements alone he is worthy of any such award."

"The truest measure of Rick’s influence on our organization and on our community, however, is found in the current readiness of our Company to respond to the emergency service needs of our community.  Over the last four years in particular, Rick has been the driving force behind a number of initiatives that have brought the BBVFC to an unparalleled state of readiness.  He initiated the live-in program, through which generally younger firefighters exchange overnight duty tours, when volunteer response is most challenged, for a place to live.  Having these individuals in the station at night dramatically reduces response times in a world where minutes are precious.  He also pushed for a duty crew program, which creates a mechanism for trained firefighters who might not be able to meet the Company’s normal attendance requirements to maintain membership by, again, committing to duty tours during critical hours.  While not a technologist himself, Rick saw the benefits of new technology to quality service and pushed the Company to adopt and to embrace it.  Lastly, and probably most importantly, Rick did not do everything himself.  He identified motivated individuals, gave them responsibility and coached them into being leaders.  In this regard, his influence will be felt for years to come."

BBVFC fire lieutenant and past vice president Kristin Miller was selected by the Ocean View Police Department for her service there.  Her quick action with several other officers saved a motorist from a burning vehicle last year.  Kristin, a Bethany Beach native and graduate of Indian River HS and Del Tech, has been a BBVFC member since 2001 and comes from a family of volunteers with the Millville VFC.  Saturday's News Journal carried the following segment on Kristin:

“We really don’t get many thank you’s,” said Cpl. Kristen Miller, who was honored for rescuing passengers from a burning vehicle in April before additional emergency personnel responded — and all without the aid of fire equipment. “You don’t think about your safety [in a situation like that] — most officers are like that. You’re either going to sit there and watch someone burn or help them. You really don’t think about it.”

Former member Doug Scott, who is now an assistant chief with the Millville VFC, was chosen for the award by his organization.

Congratulations to all the recipients. 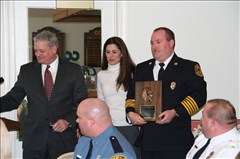 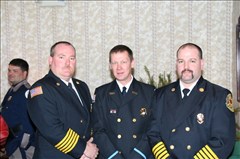 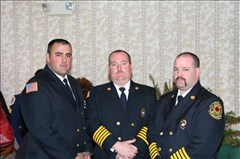 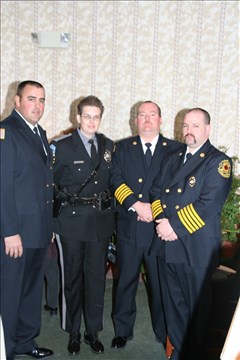